Delhi have finished their group league engagements with 16 points from six games but now are in danger of crashing out with three teams -- Himachal Pradesh, Maharashtra and Kerala locked on 14 points.

Rishabh Pant once again showed his mastery in white ball cricket with a brilliant 93-ball-135 but couldn’t help Delhi lost a thriller to Himachal Pradesh by two runs with a serious possibility of losing out on quarter-final berth. The hosts scored a competitive 304 for 5 in 50 overs with Prashant Chopra scoring 150 off 149 balls with 22 boundaries and two sixes. Delhi were all-out for 302 in 49.4 overs. Delhi have finished their group league engagements with 16 points from six games but now are in danger of crashing out with three teams — Himachal Pradesh, Maharashtra and Kerala locked on 14 points.

With Maharashtra facing Kerala in the decider, one team will go on to 18 points and Delhi will pray that Bengal beat Himachal in the final game so that they can qualify as the second team. Delhi in reply looked in sight of victory as Pant went all guns blazing during his career-best List A knock in which he hit 16 boundaries and five sixes. The century came in only 69 balls but needing 9 runs from the last over, Pradeep Sangwan and skipper Ishant Sharma were dismissed within a space of two deliveries.

When Pant was batting, the target looked like a cakewalk as he added 115 runs in only 15.4 overs with IPL specialist Nitish Rana (52). However once Rana was out, the middle-order caved in with no one able to give beefy left-hander enough support. He punished his former India U-19 teammate left-arm spinner Mayank Dagar (0 for 70) along with off-spinner Ayush Jamwal, who also got a lot of stick.

Right arm pacer B Vikas Galetiya was also hit out of the ground and it was Sangwan, who was responsible for Pant’s run-out with Delhi needing only 16 runs from three overs. Sangwan then himself got stuck and increased pressure on others as his indiscretion is all set to cost Delhi a place in the quarter-finals. Not to forget, getting Kshitij Sharma, the player who has been constantly under scanner for not being selected on merit being given a chance in the last game, which Delhi had also lost. 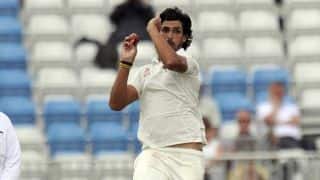 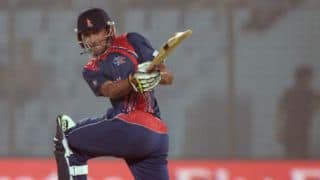