Karnataka, by virtue of beating Maharashtra, are already in the final.

Saurashtra will start as favourites with skipper Cheteshwar Pujara in their ranks as giant killers Andhra will be aiming to put up a gritty fight in the second semi-final of the Vijay Hazare Trophy. Languishing at the bottom of the Plate Group in most seasons, this one has been a remarkable turnaround for the southern state, who have beaten Mumbai, Tamil Nadu and Gujarat at the group league stage and then beat Mushtaq Ali champions Delhi in the quarter-final.

“Our team is not afraid of any opposition. At least one thing that has happened this season is that our boys have been able to get rid of inferiority complex. They are not intimidated by names,” Amdhra coach Sanath Kumar told PTI ahead of the match. Asked if there’s any strategy for Pujara, he smiled and said: “The incoming delivery.”

India’s Test specialist has faced a bit of problems with off-cutters and his main paceman Siva Kumar will be hoping to exploit that weakness. However none of the Andhra bowlers have pace to trouble Pujara, who is a known domestic giant having hammered oppositions to submission. His near about 55 average in List A speaks volumes of his domination at this level.

For Andhra, keeping a Saurashtra batting line-up that is also likely to have Ravindra Jadeja back in the XI after a side strain on a placid Kotla track, can be too much of an ask. A lot will depend on how their outstation professional Bharghav Bhatt bowls on the Kotla track. The batting will depend on the trio of Kona Bharath, Ricky Bhui and Hanuma Vihari with Ashwin Hebbar for support. 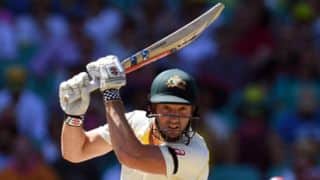