Test stars Murali Vijay and Ravichandran Ashwin had mixed fortunes with the former being dimissed cheaply while the off-spinner returned figures of two for 38 for Tamil Nadu.

Chennai: Tamil Nadu rode on centuries by captain Vijay Shankar and M Kaushik Gandhi to post a 76-run win over Gujarat in the opening match of the Vijay Hazare Trophy Group ‘C’ league today. The home side posted 311 for 8 in 50 overs thanks to the 219-run partnership between Shankar (100) and Gandhi (127) and held off a late challenge by Bhargav Merai (101) to restrict Gujarat to 235 all out in 45.1 overs.

Test stars Murali Vijay and Ravichandran Ashwin had mixed fortunes with the former being dimissed cheaply while the off-spinner returned figures of two for 38. Sent into bat by Gujarat captain Priyank Panchal, the home side lost Test star Murali Vijay early, when he was caught behind by Dhrun Raval off Chintan Gaja for 11.

Opener Gandhi and one-drop batsman B Aparajith (16) put on 31 runs before the latter was caught by H P Patel off medium-pacer Bhargav Merai for 16. Gandhi, who survived a few chances, made the most of it and played some good shots all-round the wicket.

All-rounder Shankar, coming off a good run of scores in the local games, played confidently and slammed some e boundaries and two big sixes. However, a flurry of wickets towards the end meant Tamil Nadu finished with 311.

In reply, Gujarat saw opener S B Gohil fall in the first over to comeback man Aswin Crist. Panchal was the only one to offer resistance as the team slumped to 124 for 6 in the 25th over.

Merai, however, played a defiant knock, which included some beautiful drives and also hit a huge six off Washington Sundar and brought up his ton in 94 balls.

Meanwhile, Surya Kumar Yadav blasted 11 fours and seven sixes in a 85-ball unbeaten 134 while Jay Bista hit 90 to shine in Mumbai’s 74-run victory over Madhya Pradesh. In the day’s other match, Andhra Pradesh cruised to a six-wicket win over Team Rajasthan thanks to B Sumanth’s unbeaten 71. 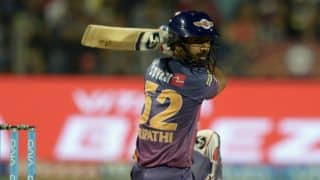