In their first completed matches of the season, both Delhi and Haryana registered victories albeit in rain-curtailed affairs.

In their first completed match of the season Delhi defeated Baroda by 10 runs at the Moti Bagh Stadium in Vadodara. After the match was reduced to 38-overs-per-side, Baroda captain Krunal Pandya opted to bowl and his bowlers quickly reduced Delhi to 27/2 in 5.5 overs. Krunal himself took 4/34, running through the opponent’s middle-order as they were bowled out for 148 in 37.4 overs. Nitish Rana top-scored with 27 off 42 followed by Anuj Rawat who managed 21 off 39.

Baroda had a better start with the opening pair adding 35 runs, a partnership that was broken by Suboth Bhati (1/19). Pacer Navdeep Saini (3/24) then struck in successive overs to leave them in some trouble. Baroda kept losing wickets regularly and never looked in control of the chase. They were eventually bowled out for 128 in 33.2 overs.

Half-centuries by Jayant Yadav (67) and Sumit Kumar (64*) helped Haryana to a four-wicket win against Odisha by four wickets at Sangramsinh Gaekwad Sports Academy in Vadodara. Batting first, Odisha were kept to 207/9 in a rain-affected contest reduced to 46-overs-a-side. Middle-order batsman Govinda Poddar was their top-scored, hitting 64 off 95. Harshal Patel and Sumit Kumar of Haryana took three wickets each.

In reply, Haryana lost half their side for 78 inside 22 overs with Deepak Behera (2/31) and Rajesh Mohanty (2/37) running through their top-order. Jayant and Sumit joined forces to stabilise the innings, putting their chase back on track with a 128-run stand for sixth wicket that proved decisive.

The match between Himachal Pradesh and Uttar Pradesh was abandoned without a ball bowled. 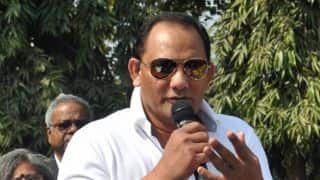