In the other Group A matches, Jharkhand beat Andhra while Karnataka sealed an eight-wicket win over Saurashtra.

Kerala wicket keeper-batsman Sanju Samson made a case for himself for the upcoming T20s against Bangladesh by hitting a blistering double century as Kerala thrashed Goa by 104 runs in their Elite Group A game of the Vijay Hazare Trophy here on Saturday.

Riding on Samson’s record-breaking unbeaten 212 off just 129 balls, Kerala posted a mammoth 377/3 on the board and restricted Goa to 153/3 after play was called off due to inclement weather.

Goa were 104 runs short of the revised target. The cynosure of all eyes at the Alur Cricket Stadium II near here was Samson.

Opting to bat, Kerala lost openers skipper Robin (10) and Vishnu Vinod (7) cheaply and were in a spot of bother at 31-2. But Samson, who struck 21 fours and 10 sixes in his knock, hammered the opposition bowlers.

With this knock, Samson holds the record for the highest Indian List A domestic score, after he went past Karn Kaushal’s 202, scored for Uttarakhand.

Samson is the eighth Indian to score a double hundred in List A cricket. His is also the highest score by a wicket- keeper in List A matches, surpassing 209 by Abid Ali.

Also Samson hit the fastest List A 200 by an Indian, (in 129 balls). He also became the first Indian to score a list A 200 at number three position.

The partnership of 338 betweenSamson and Baby is a new List A record for the third wicket, as they went past the 309 run stand betweenTim Curtis and Tom Moody for Worcestershire in 1994.

Samson thus made a case for himself and played a timely knock, with Rishabh Pant struggling and the future of veteran stumper-batsman MS Dhoni uncertain. The chase was always going to be uphill task for Goa, who fell way beyond the target. 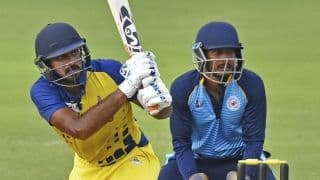