The match between Delhi and Maharashtra was abandoned without a ball being bowled.

Young Sumit Kumar produced a scintillating all-round performance as Haryana defeated Baroda by 58 runs in the Elite Group B match of the Vijay Hazare Trophy National One-Day tournament in Vadodara on Saturday.

Sumit first struck a splendid 66-ball 58 to lift his team’s total to 217. He then starred with the ball claiming five wickets to seal the match for Haryana.

Electing to bat, Haryana rode on opener Ankit Kumar (48), Pramod Chandila (48) and Sumit’s innings to put a respectable total of 217.

Ankit’s innings was laced with five fours while the duo of Pramod and Sumit hit four boundaries each. Sumit also hit the lone six of the innings.

For Baroda, captain Krunal Pandya starred with the ball yet again, returning with the figures of 3/46. He picked up the vital wickets of Ankit and Pramod. While Atit Sheth and Rishi Arothe scalped two wickets each.

Chasing 218, Baroda were bundled out for 159 in 40.2 overs, thanks to a disciplined effort by the Haryana bowlers.

The 23-year-old Sumit, who rattled the opposition, picked up five wickets, while leg spinners Amit Mishra accounted for three. India spinner Yuzvendra Chahal and Jayant Yadav claimed a wicket each.

Openers Kedar Devdhar and Aditya Waghmode provided a good start to the Baroda innings but the former was bowled by a Chahal delivery.

Waghmode went on to top-score for his team hitting an excellent half century but it was not enough to take them over the line. His 65-run knock included seven boundaries.

However, no other batsman could capitalise on their starts and failed to built a partnership with Waghmode.

This was the second win of the season for Haryana while Baroda remained winless in five matches and are out of contention for a berth in the knockouts.

In the other Group B match of the day, spinner Karan Kaila picked four wickets before Gurkeerat Singh and Anmolpreet Singh helped Punjab thrash Vidarbha by 7-wickets

The match between Delhi and Maharashtra was abandoned without a ball being bowled. 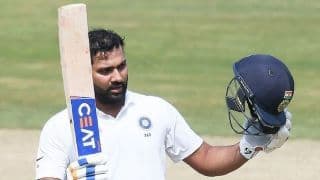