Opening batsman Murali Vijay scored 117 off 131 as Tamil Nadu sauntered to an eight-wicket win over Jammu and Kashmir.

Opening batsman Murali Vijay scored 117 off 131 as Tamil Nadu sauntered to an eight-wicket win over Jammu and Kashmir in Jaipur on Friday. Set to 239 to win, TN chased down the target with two overs to spare after Vijay had set the platform with 14 fours during his knock. Baba Aparajith scored an unbeaten 86 as TN cruised to their fifth straight win of the season.

J&K were put in to bat at the KL Saini Ground and were off to a decent start with the openers adding 42 runs. However, they quickly slipped to 61/3 with Sai Kishore taking two wickets in his consecutive overs. Fifties from Qamran Iqbal, Shubhman Singh and Adbul Samad helped them to a respectable 238/9 but that wasn’t going to be enough.

Captain Naman Ojha scored a superb century but his effort went in vain as Madhya Pradesh suffered their third defeat of the season. Opting to bat at the Sawai Mansingh Stadium in Jaipur, Ojha smashed 130 off 144 while Anand Baise scored 61 off 63 as MP posted a challenging 282/7 in 50 overs.

However, Services pair of Ravi Chauhan and Gahlaut Singh scored century apiece as they chased down the target with 17 deliveries to spare. Chauhan scored 118 while Gahlaut belted 10 fours and four sixes in a quickfire 109 off 84.

Rajasthan’s winless run continued as they slumped to their fifth defeat of the season with Tripura winning by 47 runs at Jaipur Vidyalaya. Put in to bat, Tripura’s innings was driven by opener Bishal Ghosh hitting 128 off 129 with 10 fours and three sixes while Tanmay Mishra scored 56 as they posted 285/8. In reply, several Rajasthan top-order batsmen got the starts but only captain Mahipal Lomror could convert his own into something significant. Lomror scored 71 as Rajasthan were bowled out for 238 in 47 overs. 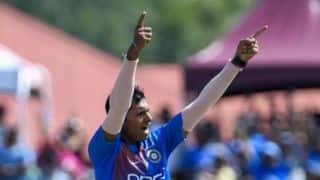