Porel returned with impressive figures of 6/34 in his 10 overs, while senior pacer Ashok Dinda (2/27) was also among wickets.

Ishan Porel s six wickets coupled with an unbeaten 86 from Shreevats Goswami helped Bengal register a thumping eight-wicket win over Jammu and Kashmir in a Round 5 Elite Group C match of the Vijay Hazare Trophy 2019-20 on Monday.

Put into bat, Porel opened with a devastating spell and ran through the J&K top order at the Jaipuria Vidyalaya Ground in Jaipur. Courtesy, the India A speedster, J&K found themselves with half their back in the hut as early as the 10th over. An unbeaten 57 from Ram Dayal along with Fazil Rashid s 43 helped J&K to 169 in 48.2 overs.

Porel returned with impressive figures of 6/34 in his 10 overs, while senior pacer Ashok Dinda (2/27) was also among wickets.

Chasing the modest score, left-handed Goswami tonked 10 boundaries and one six during his 80-ball knock. He found valuable support from Abhimanyu Easwaran (51) as the duo stitched 118 runs for the opening stand as Bengal comfortably chased down the target in 28 overs. Former captain Manoj Tiwary remained unbeaten on 27.

At Jaipur s KL Saini Ground, Madhya Pradesh defeated Bihar by seven wickets. Sent into bat, Madhya Pradesh bowled out Bihar for 137 in 40.4 overs. Mihir Hirwani and Gaurav Yadav did the bulk of the damage sharing seven wickets between them. Hirwani pocketed 4/29 in 8.4 overs, while Yadav added three wickets to his tally conceding 41 runs in 10 overs.

MP chased down the target in 27.4 overs for the loss of three wickets. Captain Rajat Patidar top scored with 48, while Mukul Raghav chipped in with 46.

In another Group C encounter, Gujarat beat Tripura by a comfortable 101-run margin. Gujarat rode on Bhargav Merai’s 125-run knock to post a challenging 305 all out, a target which proved to be a tall task for Tripura as they could only muster 204 for eight in their 50 overs. 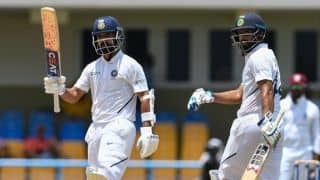