Opener Manan Vohra smashed a 64-ball 108 not out as Chandigarh thrashed Arunachal Pradesh by 90 runs to secure their second successive win in the Plate Group of the Vijay Hazare Trophy 2019-20 tournament in Dehradun on Wednesday.

Skipper Vohra struck eight fours and as many sixes in his unbeaten knock as Chandigarh posted a massive 207/2 after the match was reduced to 20-over-a-side because of wet outfield at the Abhimanyu Cricket Academy.

In reply, Arunachal Pradesh were restricted to 117/7 with left-arm spinner Gurinder Singh (4/12) once again returning with impressive figures to hand Chandigarh their second win in as many days.

For Arunachal Pradesh, Rahul Dalal remained not out on 76 but there was no support at the other end with Gurinder giving regular breakthroughs.

Chandigarh (10 points from three matches) climbed to second spot behind Puducherry who lead the Plate Group table on net run-rate after their 10-wicket win over Mizoram at the Rajiv Gandhi International Stadium here.

Azad could not carry on and lost his wicket two balls later. But there was no stopping Vohra who found a fine ally in Shivam Bhambri (68 from 36 balls; 9×4, 2×6) as the duo toyed Arunachal Pradesh attack in their 142-run stand that came off just 72 balls.

In another match, Puducherry bundled out Mizoram for 67 runs in 33.2 overs with veteran seamer Vinay Kumar (3/14) and Damodaren Rohit (3/2) doing the maximum damage.

In reply, Vikneshwaran Marimuthu (44 not out) and Paras Dogra (24 not out) took just 13.2 overs to seal their 10-wicket win to remain in the lead of the Plate Group standings. 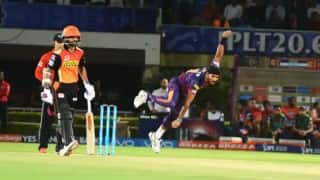