It was a Rahul and Pandey show all the way, as the duo hammered the Chhattisgarh bowlers.

Skipper Manish Pandey and opener KL Rahul shone with the bat as Karnataka defeated Chhattisgarh by 79 runs in their Elite Group A match of the Vijay Hazare Trophy 2019-20 in Bengaluru on Wednesday.

Put into bat first at M Chinnaswamy stadium, Karnataka rode on Rahul’s 81 runs and an unbeaten 142 by Pandey. It was a Rahul and Pandey show all the way, as the duo hammered the Chhattisgarh bowlers.

Karnataka posted a decent 285/7 in their 50 overs and managed to bundle out the opposition for 206 in 44 overs.

Karnataka lost opener Devdutt Padikkal (8) and Karun Nair (1) quickly. But Rahul and Pandey had other plans, as they conjured up a solid 150-run stand for the third wicket.

Rahul, who was dropped from the Indian Test team against South Africa, made a statement of sorts to the national selectors. He hit six fours and a lone six in his patient 103- ball knock, as he played second fiddle to Pandey.

While wickets kept falling at the other end, Pandey kept playing his shots and it was because of his incredible knock that Karnataka crossed the 280-run mark.

Karnataka pacers M Prasidh Krishna (3/31) and Ronit More (2/52) ran through the Chhattisgarh top order, and they were struggling at 68/3. Then spinner Shreyas Gopal (3-53) spun his web around Chhattisgarh batsmen, as their chase never really took off.

For Chhattisgarh, Amandeep Khare fought a lone battle with 43 out of 62 balls. Amandeep was the last man to be dismissed, as Chhattisgarh’s innings folded up at 206.

Meanwhile, in the other Elite Group A match, Saurashtra thrashed Andhra by a whopping 153 runs, in which Samarth Vyas and Jaydev Unadkat shone with the bat and ball, respectively.

In another match, Jharkhand pipped Kerala by five runs to grab four points in 36-over game that went down to the wire. 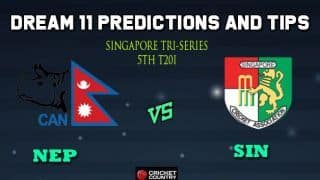