While Ashwin batted using a helmet with a BCCI logo, Mayank Agarwal and KL Rahul, who were playing for Karnataka, batted wearing helmets with the logo taped.

Indian off-spinner R Ashwin may be in trouble following his appearance in the Vijay Hazare Trophy 2019-20 final.

Ashwin, who was playing for Tamil Nadu as they squared off against Karnataka, may be fined by match referee Chinmay Sharma for sporting BCCI logo on his helmet during the domestic match.

Ashwin, who was promoted to number three as Tamil Nadu batted first in the final against Karnataka, could only score eight runs with the bat.

A Board of Control for Cricket in India (BCCI) functionary stated that it was match referee’s discretion whether to fine Ashwin or not. However, the rules indicate that Ashwin may be fined for breaking BCCI’s clothing regulations.

“The clothing regulations clearly say that you have to tape the BCCI logo if you plan to use the same helmet in domestic matches as the one you wear while playing for India. The match referees as well as players have been briefed about the same over the years and if someone is guilty of committing the mistake, he can be fined by the referee,” the BCCI functionary was quoted as saying by IANS.

While Ashwin batted using a helmet with a BCCI logo, Mayank Agarwal and KL Rahul, who were playing for Karnataka, batted wearing helmets with the logo taped.

Batting first, Tamil Nadu scored 252 on the back on Abhinav Mukund’s 85 and Baba Aparajith’s 66. For Karnataka, Abhimanyu Mithun scalped five wickets and became the first bowler to scalp a hat-trick in the Vijay Hazare Trophy final.

The Manish Pandey-led side went on to defeat Tamil Nadu by 60 runs with VJD method coming into play. 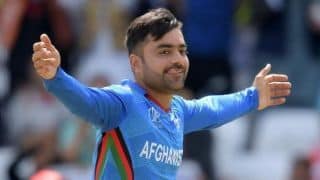