Karthik, Mukund half-centuries get Tamil Nadu off to a winning start

Tamil Nadu got off the mark in the 2019-20 Vijay Hazare Trophy with a fine six-wicket win over Rajasthan with Abhinav Mukund, Baba Aparajith and skipper Dinesh Karthik striking half-century each. Rajasthan, batting first, put up 261/9 with medium-pacer Krishnamoorthy Vignesh claiming 3/34, but TN put up a strong batting performance to chase down the target.

Rajasthan were reduced to 53/4 before Ashok Menaria and Arjit Gupta added 77 runs for the fifth wicket. Gupta top scored with a half-century and with a helping hand of 48 from 25 balls from Rahul Chahar, Rajasthan were propelled to beyond 250.

Tamil Nadu were jolted early in their chase when Aniket Choudhary sent back N Jagadeesan cheaply. It was then that Mukund and Aparajith added 114 for the second wicket to put the chase on track. Hari Nishanth was run out for 20, and even though both were dismissed, Karthik and Shahrukh Khan added another 100 runs to get TN above the line.

Half-centuries from Bishal Ghosh and Milind Kumar proved enough for Tripura as they registered a narrow two-wicket over Jammu Kashmir on Tuesday. J&K s below-par batting performance saw them getting all out for 197 in 43.2 overs with Harmeet Singh leading the charge with 3/32 and Qamran Iqbal top-scoring with 43.

Tripura also endured a top-order failure and were reduced to 35/4 before Kumar and Ghosh added 99 runs for the fifth wicket. However, with both batsmen dismissed in quick succession, J&K seemed like defending the score but skipper Manisankar Murasingh chipped in with 26 off 33, enough for Tripura to crawl over the line.

Roosh Kalaria starred with the ball as Gujarat beat Bengal by 38 runs against Bengal in Jaipur on Tuesday. The pacer s 4/34 dismissed Bengal by 215 with only Sreevats Goswami showing resistance with 79.

Bengal were reduced to 25/3 before Wriddhiman Saha and Anustup Majumdar adding 62 for the fourth wicket. Majumdar s 39 and Arnab Nandi s 21 laboured Bengal above 200 before Kalaria wiped off the tail.

For Gujarat, Bhargav Merai top-scored with 63 ,while Manprit Juneja s 47 and Piyush Chawla s 26 propelled Gujarat above 250. Dinda s 3/58 and two wickets each to Akash Deep and Sayan Ghosh dealt blows in the end. 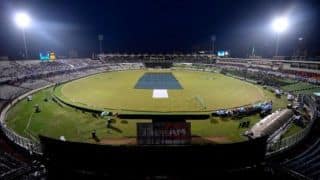 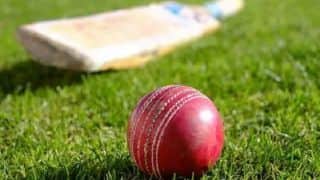