While Puducherry defeated Meghalaya, Assam beat Mizoram. The Uttarakhand versus Chandigarh match ended in a washout.

Puducherry and Assam registered wins while Uttarakhand versus Chandigarh match ended in a washout in the second round Plate group matches in the Vijay Hazare Trophy 2019-20 on Wednesday.

Like on the opening day, the rain made its presence felt on the second day of the competition.

Puducherry opened their campaign with a four-wicket win over Meghalaya in a rain-curtailed 28-over/side encounter at the Abhimanyu Cricket Academy in Dehradun.

Batting first, Meghalaya, who had beaten Sikkim by 194 runs on Tuesday, were bundled out for a paltry total of 107 as the duo of Sagar Trivedi and Sagar Udeshi starred with the ball. The pair shared six wickets between themselves, with Trivdei scalping four wickets (4/18) and Udeshi picking up two (2/15), after skipper Damodaren Rohit won the toss and elected to bowl.

Abhay Negi’s four-wicket haul had put Puducherry in a spot of bother in the chase of 108 after the side was reduced to 68/6. However, Suresh Kumar’s unbeaten 37 off 45 balls and veteran Vinay Kumar’s 20 not out off 20 balls helped Puducherry cross the finish line, reaching the target in 23.5 overs.

Like Puducherry, Assam too kicked off their campaign with a win. The Sibsankar Roy-led side registered a comfortable 113-run win over Mizoram at the Tanush Academy Ground in Dehradun.

Mizoram’s decision of electing to bowl paid early dividends after they scalped two early wickets, dismissing Rahul Hazarika and Riyan Parag with only 12 runs on the board.

However, Swarupam Purkayastha and Gokul Sharma denied Mizoram any immediate success. The two added 159 runs together before Sharma was dismissed for 57 off Abrar Kazi.

Sharma’s fall brought skipper Roy in the middle. The Purkayastha-Roy pair put up an unbeaten 153-run stand in the 14.4 overs as Assam marched towards 324-run total.

While Purkayastha, who opened the batting, scored an unbeaten 163 off 150 balls, hitting 18 fours and 4 sixes, Roy hammered unbeaten 79 off 53 balls, with the help of five fours and four sixes.

Assam then restricted Mizoram to 211/6 in the chase as Roshan Alam scalped four wickets. While Kazi scored an unbeaten 78, Mizoram were never in a race to chase down the target. 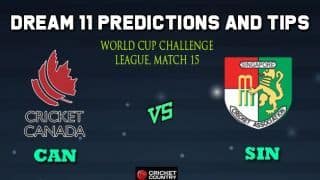