In the second Elite Group A game, Hyderabad defeated Karnataka by 21 runs to grab four points.

After restricting Saurashtra to 245/9 in their Elite Group A match at the Alur cricket stadium III, Mumbai romped home with two overs to spare courtesy Iyer’s gritty 75 and Surya’s formidable unbeaten 85.

Asked to bat first, Saurashtra opener Harvik Desai (0) was trapped in front of the wicket by experienced pacer Dhawal Kulkarni. Then Sheldon Jackson (35) and one-down Samarth Vyas (34) tried to resurrect the innings with their 78-run stand for the second wicket.

But as the duo was poised for a big score, spinner Shams Mulani sent them back in quick succession as Saurashtra were in a spot of bother at 79/3.

Arpit Vasavada showed some composure and made a gritty 59 off 75 balls, striking five fours, to rebuild the Saurashtra innings.

After Vasavada fell, it was due to an unbeaten 40 by number 7 batsman Chirag Jani, that Saurashtra went past the 240-run mark.

For Mumbai, experienced pacer Shardul Thakur, who has played for India, and spinner Shams Mulani grabbed three wickets each.

The chase was not a walk in the park for the Vinayak Samant-coached team as they lost Jay Bista (2) and Siddesh Lad (0) inside the first two overs.

Then skipper Shreyas Iyer (73) and Aditya Tare (29) conjured a 101-run stand for the third wicket to steady Mumbai’s ship.

The duo took the Saurashtra bowlers to task as Iyer struck eight fours and two sixes in his 82-ball knock, while Tare hit two boundaries.

However, after the two and allrounder Shivam Dube (9) walked back to the pavilion, Suryakumar (85 not out) took the onus and stitched an unbeaten 115-run stand with Shubham Ranjane (45 not out) as the duo ensured that the team registered a win.

In the second Elite Group A game, Hyderabad defeated Karnataka by 21 runs to grab four points. Ambati Rayadu, who came out of retirement, held the fort for Hyderabad with an unbeaten 87 and later slow-left arm orthodox bowler B Sandeep grabbed four wickets. 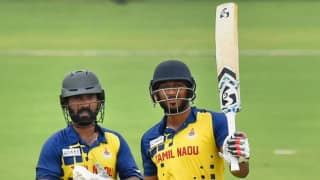