Gujarat rode on Jasprit Bumrah's three-wicket haul and Parthiv Patel's 88 to make the quarterfinals of the Vijay Hazare Trophy after beating Bengal by seven wickets.

Chennai: Ranji Trophy champions Gujarat rode on Jasprit Bumrah’s three-wicket haul and Parthiv Patel’s 88 to make the quarterfinals of the Vijay Hazare Trophy after beating Bengal by seven wickets in a Group C match on Monday. However, despite losing, Bengal topped the Group C table with 20 points and booked a berth in the last-eight stage of the tournament. Meanwhile, Ranji Trophy finalists Mumbai failed to make the cut, finishing third in the points table after Bengal and Gujarat from Group C. Gujarat toppled Mumbai on the basis of higher net run-rate. Both Gujarat and Mumbai finished with 16 points each but the former advance to the knock-out round, winning by a huge margin over Bengal today and significantly improving their run-rate. Vijay Hazare Trophy: Dhoni’s Jharkhand reaches quarter-finals with win over J&K

Put in to bat, Bengal were bundled out for a meagre 168 in 49.1 overs and then Gujarat reached the target in just 28 overs, losing just three wickets in the process. Bengal batsmen simple failed to settle down, losing wickets at regular interval to be all out below 170-run mark. Only three Bengal batsmen could put on 30-plus score. Bumrah was the pick of the Gujarat bowlers with figures of 3 for 27, while Priyank Panchal (2/27) and Rujul Bhatt (2/26) chipped in with two wickets each. Vijay Hazare Trophy: Vidarbha registers 68-run win vs Haryana

In reply, skipper Parthiv led from the front, sharing 69-run stand for the first wicket with Panchal (20) and another 68-run third wicket partnership with Bhargav Merai (24 not out) to steer the team to 172 for three with as many as 132 balls to spare. Parthiv’s 88 came off 82 deliveries and was studded with 13 boundaries. Mohammed Shami returned to action after nearly two-month injury lay-off but failed to take any wicket during his seven-over spell. 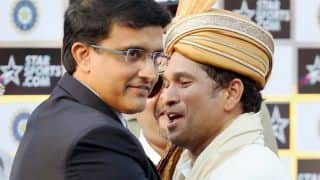