Karnataka's senior players Robin Uthappa and Vinay Kumar have been in stunning form.

Heavyweights Karnataka will aim to continue their dream run and claim an unprecedented hat-trick of titles in the season, when they square off against underdogs Railways in the Vijay Hazare Trophy final at Eden Gardens.

Karnataka have not looked back after their Ranji Trophy 2013-14 triumph as they went on to beat Rest of India to clinch Irani Trophy.

They will now be eyeing their maiden title in the one-day format, while Railways will look to bag the title for the second time following their 2005-06 feat.

The southern side boasts of a balanced side with both batsmen and bowlers in stellar form.

Karnataka have a strong batting line-up, which includes Robin Uthappa, who is leading the run chart with 528 runs at an average of 88.00 including three centuries. They will also have in-form batsmen in Karun Nair and Mayank Agarwal.

It was opener Uthappa who contributed immensely to the team’s success as his back to back centuries had ensured 300-plus totals at the JU second campus ground in Saltlake in the quarters and semis.

Back in his elements, the out-of-favour India batsman will surely look for a dream comeback into the national side by producing another stupendous show.

Bowling is spearheaded by skipper R Vinay Kumar, the out-of-favour India medium pace who too has impressed having taken 27 wickets from seven matches, including three five wicket hauls, to lead the tally.

Having grabbed 54 wickets from last 11 matches (in all formats), Vinay Kumar will look to exploit the bowling-friendly Eden track which has seen low scoring totals in the tournament.

It’s in this area; Railways’ will have the X-factor as they have played the three knock-out matches at Eden Gardens while Karnataka will be new to the conditions.

It will be interesting to see how Karnataka batsmen, who feasted on the Saltlake track, will cope against the likes of mercurial pacer Anureet Singh, Krishna Kant Upadhyay and Chanderpal Saini as the Railways have a formidable pace attack.

Leg spinner Karn Sharma and left-armer Ashish Yadav will add variety to their attack as it looks to be a battle between the Railways bowling versus Karnataka batting.

“Karnataka are a good side and they are getting runs. But we too have played good cricket. In Ranji, we topped the pool before losing in the quarters, and here we have beaten strong teams (Punjab and Bengal) en route to the final,” coach Abhay Sharma said.

“Ultimately we have to play good cricket. We are not thinking much about the opponents but concentrating about our strength. A good delivery will always get you a wicket, be it Sachin Tendulkar or Robin Uthappa. It’s immaterial,” he added. 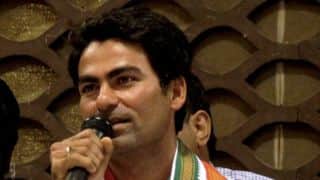