Dube slammed a quick-fire 118 in 67 balls, with seven fours and 10 sixes to get Mumbai close to the target.

A blazing 100 by all-rounder Shivam Dube went in vain, as defending champions Mumbai suffered a heartbreaking nine-run defeat against Karnataka in their Elite Group A match of the Vijay Hazare Trophy 2019-20 on Thursday.

Put into bat first at the M Chinnaswamy Stadium in Bengaluru, Karnataka posted a healthy 312/7 on the board and then bundled Mumbai out for 303 in 48.1 overs, with pacer Abhimanyu Mithun (3/40) and spinner Krishnappa Gowtham (3/51) among the wicket-takers.

For Karnataka, opener Devdutt Padikkal put up the highest score with 79 runs in 85 balls, striking 10 fours and a six. Padikkal and his opening partner KL Rahul (58) conjured 137 runs for the first wicket.

However, Mumbai struck back taking three wickets in quick succession, and left Karnataka tottering at 146/3.

Skipper Manish Pandey (62) and Rohan Kadam (32) rallied the innings with 69-run stand for the fourth wicket. As the two were poised for a big score, spinner Dhurmil Matkar removed Kadam in the 38th over. However, Pandey held the fort along with wicket-keeper B R Sharath (28), as they frustrated Mumbai bowlers.

Later, a quick-fire unbeaten 22 off 13 balls by K Gowtham ensured that Karnataka went past the 310-run mark.

Mumbai batsmen, apart from Dube, were unable to put up a fight.

Yashasvi Jaiswal (22), Aditya Tare (32), Siddesh Lad (34) and skipper Shreyas Iyer (11) threw their wickets away, getting Mumbai in trouble at 104/4. However, Dube had other plans as he took on the opposition bowlers and slammed a quick-fire 118 in 67 balls, with seven fours and 10 sixes to get Mumbai close to the target.

While wickets kept tumbling at the other end, Dube played his natural aggressive game. However, the experienced Mithun scalped Dube’s crucial wicket in the 42nd over with Mumbai needing another 36 runs. Dube was the eighth man to be dismissed.

After that, Shardul Thakur (26) and Dhawal Kulkarni (11) delayed the inevitable, but eventually Mumbai’s innings folded up in the 48th over. Karnataka grabbed four points from the match.

Meanwhile, Chhattisgarh defeated Jharkhand by seven wickets in a rain-hit match, which was reduced to 31 overs.

Hyderabad defeated Andhra by seven runs in another rain-soaked match, which was reduced to 20 overs. 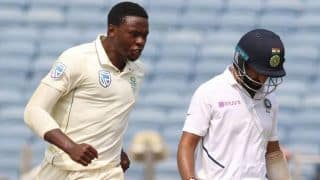