Rathour is the brother-in-law of current India U-19 national selector Ashish Kapoor and his appointment would have been a case of Conflict of Interest.

Former India opener Vikram Rathour‘s appointment as the batting coach of India A and U-19 team has been put on hold after his Conflict of Interest was brought to the notice of the Committee of Administrators (CoA).

Rathour was supposed to start with India A assignment in Wayanad but for now his appointment has been stalled indefinitely. (ALSO READ: Vikram Rathour added to India A, U19 support staff; questions raised)

Rathour is the brother-in-law of current India U-19 national selector Ashish Kapoor and his appointment would have been a case of Conflict of Interest.

“Yes, the CoA had given a go ahead for Rathour’s appointment but today Rathour gave a written declaration of his relation with Kapoor,” a senior BCCI official told PTI on Monday.

“Now the matter was discussed with Mr Rai and it was concluded that only an Ethics Officer could have decided if Rathour working with U-19s during Quadrangular series would tantamount to Conflict of Interest,” he said.

However with no Ethics officer in BCCI, it was thought Rathour’s appointment would have sent out wrong signals.

“The appointment letter was not signed. Saba had only got a go ahead on the basis of Dravid’s recommendation. For now, he will not be recruited in the A or U-19 set up,” the official confirmed. (ALSO READ: Rahul Dravid chalks the way forward for Indian cricket)

While India A coach Rahul Dravid wanted Rathour in the India A and U-19 roster, BCCI (GM Cricket Operations) Saba Karim did not intimate the CoA about the potential case of Conflict of Interest. 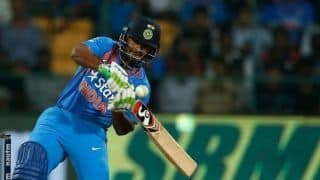