Virat Kohli scored his seventh ton, and second at Adelaide.

Virat Kohli scored his seventh ton, and second at Adelaide, on Day Three of the first Test between India and Australia at the Adelaide Oval. In doing so, he became only the fourth Indian to score a Test hundred on captaincy debut. The other three batsmen were Vijay Hazare, Sunil Gavaskar and Dilip Vengsarkar. While Kohli, Hazare, and Gavaskar scored the tons in their debut innings as captain, Vengsarkar’s ton came in the second innings of the match.

Hazare scored an unbeaten 164 against England at Feroz Shah Kotla in Delhi in November 1951. India went on to draw the match with England after only three innings were possible in the match. On the other hand, Gavaskar’s 116 came against New Zealand at Auckland in January 1976. India won the match by eight wickets after Erapalli Prasanna took 11 wickets in the Test.

Vengsarkar scored 102 in India’s second innings — the third innings of the match — after India were bowled out for just 75 in the first innings against West Indies at the Feroz Shah Kotla in November 1987. However, his ton was not enough to avert a defeat, as a belligerent fourth-innings 109 off 111 balls by Viv Richards propelled the West Indies to a remarkable victory. 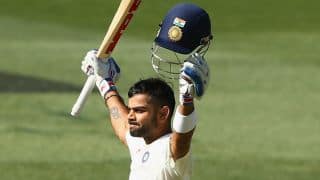