After 15 overs, Bangalore were 136 for 1 with Kohli and de Villiers still looking strong.

Virat Kohli and AB de Villiers brought up fifties during Indian Premier League (IPL) 2016, Match 44 between Royal Challengers Bangalore and Gujarat Lions at Bengaluru on Saturday. They already had a stand of 116 runs in 11 overs with 135 runs on board for RCB. It was Kohli and de Villiers’ fourth 100-run partnership in this ninth edition of IPL. Kohli and de Villiers also hold the record of most 100+ run stand in the history of IPL. They have six such stands to their name. Kohli also has six 100+ partnerships with Chris Gayle in the IPL which shows how dominant he has been in the T20 league. LIVE CRICKET SCORECARD: Royal Challengers Bangalore vs Gujarat Lions, IPL 2016, Match 44 at Bengaluru

After 15 overs, Bangalore were 136 for 1 with Kohli and de Villiers still looking strong. Chris Gayle was dismissed for six off 13 balls during Match 44 of Indian Premier League (IPL) between Royal Challengers Bangalore’s match and Gujarat Lions at Bengaluru on Saturday. Gayle’s poor run in this edition of IPL continues as this was his fifth consecutive single digit score. Gujarat Lions won the toss and put Virat Kohli-led RCB to bat first.

It is a must-win fixture for RCB, while Gujarat is one win away to make it to the final four of this ninth edition of IPL. While RCB have four games in hand, Gujarat have two more games after Saturday’s match.

Dhawal Kulkarni was the wicket-taker for Gujarat who bagged Gayle’s wicket in the fourth over. While playing towards he off-side, Gayle got an inside edge that clipped his leg stump, leaving Bangalore at 19 for 1 after 3.5 overs. After dismissal of Gayle, AB de Villiers joined Kohli at the crease and the duo went on to put up 96-run stand for the second-wicket in 9 overs. 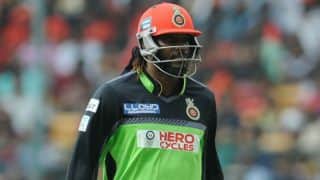