Virat Kohli: AB de Villiers delivers like no one in pressure situations

Virat Kohli: AB de Villiers delivers like no one in pressure situations

Royal Challengers became the first team to qualify for the final of IPL 2016.

Royal Challengers Bangalore (RCB) became the first team to qualify for the final of the Indian Premier League (IPL) 2016 by thumping Gujarat Lions (GL) in Qualifier 1 at Bengaluru’s M. Chinnaswamy Stadium. The man-in-form Virat Kohli was out on a duck for the first time this summer. However, it was AB de Villiers who rose to the occasion to take RCB over the line despite losing wickets at the other end. Kohli mentioned in the presentation ceremony about the respect he shows for the star batsman, who was in a forefront of a rescue mission yet again. He, in fact, tweeted kind words about de Villiers as well. Full Cricket Scorecard: Gujarat Lions vs Royal Challengers Bangalore, IPL 2016 Qualifier 1 at Bengaluru

What a performance. Big Game, Pressure Situation & the best in the world, @ABdeVilliers17, delivers like no one else pic.twitter.com/NNGc24shV2

RCB reached the finals in the second and fourth season of IPL, which they lost to Deccan Chargers (DC) and Chennai Super Kings (CSK) respectively. This will be RCB’s third IPL final and will be itching to lift their maiden IPL trophy on May 29. It would be a perfect script if they achieve this feat, as the match will be played in their own habitat. Read: AB de Villiers’ match-winning knock and other highlights

de Villiers, on the other hand, needs 51 runs to become the second highest run-scorer in an IPL season. Given the kind of form he is in, it wouldn’t be a surprise if he reaches this spectacular exploit. 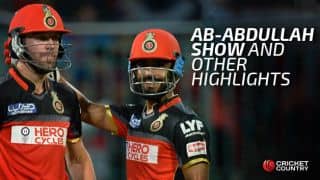 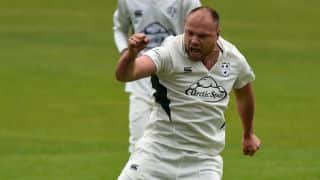 Leicestershire’s 43 all out against Worcestershire: related records