Sourav Ganguly is expected to have a discussion with Virat Kohli and Anil Kumble regarding their spat which is hitting the headlines everyday.

With the ongoing tussle between Virat Kohli and head coach Anil Kumble hitting the headlines everyday, former Indian skipper and member of Cricket Advisory Committee (CAC), Sourav Ganguly has a word of caution for the Indian cricket team. The 44-year-old demanded the national side to concentrate on ICC Champions Trophy 2017 campaign and not focus on any other issue. Rumour has it that Ganguly was supposed to hold a discussion with Kumble and Kohli on the eve of their tournament opener against Pakistan, but Ganguly denied any such meeting. In addition, he also stated that he is not interested in holding such talks as the team is mature enough to handle such situations. India have edge over Pakistan in their CT 17 tie, says Fleming

On being asked about the whole spat between Kumble and Kohli, Ganguly said, “Just deal with it. You re a name, you re captain of India, you re coach of India, you ll have to deal with this. Just keep quiet and play the game. I don t know (if it s affecting the players). Whether there is uncertainty or not, I don t know. We ll have to wait and see. All of us can talk. But there are two exceptional cricketers. They re responsible cricketers. They know what they re doing”, said Ganguly, according to Wisden India.

Ganguly further added, “I ve been at the ground since 8.00 am (talking about Australia – New Zealand clash). I m supposed to have spoken to players, spoken to (Virat) Kohli. I ve not done it one bit, and neither am I keen to. Everybody faces controversy. Just deal with it and go on. You should not worry about it. Professionals find a way. Look at (Cristiano) Ronaldo. He s in controversies every week but he comes and takes Real Madrid to the Champions League final”, when asked whether he interacted with the duo.

It must be noted that Ganguly also faced a fierce battle with once the India coach Greg Chappell. It was regarded as one of the darkest phases of Indian cricket. India start their Champions Trophy 2017 campaign against arch-rivals Pakistan on June 4 at Edgbaston. They would be hoping to dominate their opponents on the field and divert all attention from the dressing room atmosphere. 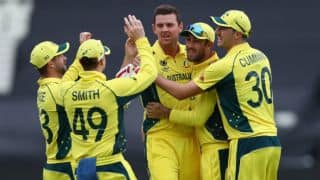