In yet another masterclass, Indian skipper Virat Kohli lead from the front and guided his side to an emphatic 6-wicket win over Sri Lanka in Colombo. The contest looked like a cakewalk for the visitors despite some resilient show by the hosts. Kohli s innings folded on 82 but not before he crossed another landmark.

Kohli started his innings with 1,748 T20I runs under his belt and ended on 1,830. With this he is now the third highest run-getter in T20I cricket only behind Tillakaratne Dilshan (1,889) and Brendon McCullum (2,140). Kohli surpassed Martin Guptill s tally of 1,806 and also Mohammad Shahzad s tally of 1,778 runs to reach this milestone.

In comparison to all the above-mentioned players, Kohli has the most number of fifties (17) but has no hundred beside his name. His average is also the highest amongst all at a staggering 53.82.

Kohli, with this innings, also completed his 15,000 international runs. 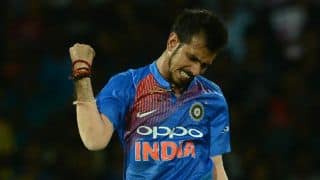 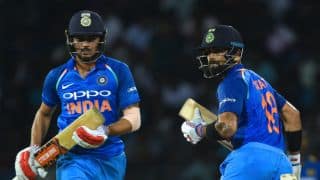