Virat Kohli became India‘s Twenty 20 International (T20I) run-getter during his knock of 66, beating Yuvraj Singh’s record of 968, where he finally got his first fifty on what has been a miserable for the Indian batting talisman. Kohli was back in his element in the T20 and was taking the attack to the cleaners with utter disdain, much like what he has been doing for a few years now. Kohli’s stroke-filled knock, however failed to take India over the line as the visitors fell short by three runs. The coloured clothing has clearly brought the best out of the Delhi dasher and looked good to score a big knock but the opportunity never came. The massive Indian contingent in Birmingham, though was treated to a brilliant display of batting by Kohli.

It was down to the last over, with 17 needed and MS Dhoni on strike. But, Chris Woakes held his nerve in spite of conceding a six off the first ball to steal a three-run victory against India in the lone T20 International at Edgbaston. India were chasing 181 and were led by Virat Kohli‘s inspired knock, but fell short of the target to end their England tour with a defeat. 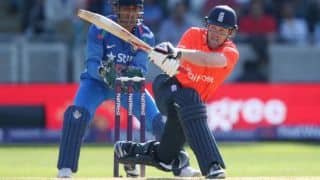