The India Test captain made it clear he didn't like his statement, after ODI losses in Bangladesh, being used out of context.

Chennai: Virat Kohli is known for speaking his heart out and on the eve of team’s departure to Sri Lanka, he made it a point to clarify his statement about team’s poor performance after ODI series loss to Bangladesh was taken out of context. Kohli told official broadcasters on the eve of the third ODI that he was “not happy with the approach of the team” which his detractors claimed to be a veiled attack on limited-overs captain Mahendra Singh Dhoni‘s captaincy. Asked about questions of friction in the team and his opinion about team’s approach, Kohli said,”I do not agree on that. I was not saying that I was not happy with that approach. READ: India vs Bangladesh 2015: ‘Doubtful decision-making’ caused ODI series loss, says Virat Kohli

I was saying that I am not happy with the way we have executed plans because we have not been able to do what we wanted to do. When I said ‘We”, it includes me also. “I think there is a massive difference. Cutting clips and copying and pasting done. Really it is not something I understand. I just mentioned it is something that any player playing in the team would feel that we have not been able to execute what we wanted to. So the whole idea is that as a cricketer I am very passionate about winning. READ: Virat Kohli’s ‘aggression’ encouraged by Rahul Dravid

“I am very passionate about playing well for the country. Helping the team win and watching the guys playing in a particular way was the whole idea behind what I had said. I strongly believe that if you have plans you must go and try to execute and if they do not work then you can say that you could not achieve that. That is the whole idea behind what I have said,” Kohli made it clear that he did not like the manner in which his statement was used out of context. 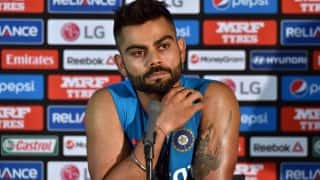 Virat Kohli: You need a stronger bowling side to win Test matches