Rohit Sharma was awarded the Man of the Match in the fifth ODI as he stroked his first hundred on South African soil.

Virat Kohli called the ODI series win in South Africa “a collective effort to create history”. India wrapped up the fifth ODI against South Africa at Port Elizabeth by 73 runs, to register their first bilateral series win in the country.

Earlier in the series, India displaced South Africa from the No.1 spot in the ICC ODI Rankings and irrespective of the result in the final ODI, India will hold onto the top spot.

“I am very pleased, it was another complete performance from us. They had the pressure of losing this series and we knew that. It’s a history and the guys have worked hard for it. Ever since the third Test in Johannesburg, it’s been a good time for us. It’s been a collective effort to create history,” Kohli said in the post-match conference.

5-1, the aim but bench strength to be tried at Centurion

Kohli has no half measures. The skipper of the ruthless Indian side is eyeing 5-1 but he hinted that with the series sealed, the bench strength will be tried in the final ODI.

“For now, 4-1 feels great. We want to win 5-1 for sure, but there might a scenario for a few more guys to get a chance in the next match. But the ultimate priority is to win and we’ll do anything we can to win,” Kohli added.

Rohit Sharma, Man of the Match

11, 10, 10, 47, 20, 15, 0, 5 — these were Rohit Sharma’s scores in the ongoing tour before Tuesday. The under pressure batsman finally delivered in the fifth one-dayer with the 17th ODI ton of his career and first in South African soil. Rohit was a awarded the Man of the Match.

“It’s been a long time coming. It’s always a good feeling when you score a hundred and your team wins. You have to keep yourself in a good frame of mind, that’s what I’ve been doing,” Rohit said at the presentation ceremony.

India won the first three ODIs, in Durban, Centurion and Cape Town before going down in the Pink ODI at Johannesburg by DLS method in the rain-marred fourth game. The sixth ODI will be played on February 16 at SuperSport Park, Centurion, a venue where India have won more ODIs than lost against South Africa. 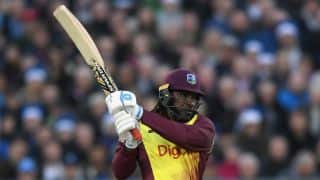