Virat Kohli's 141 gave India a chance of chasing down 364 on Day Five in Adelaide.

On a riveting Day Five, Australia clinched a 48-run victory in the first Test at Adelaide. Chasing 364 to win, India were on course with skipper Virat Kohli‘s ton and Murali Vijay‘s 99. But, in the evening session, Nathan Lyon came to the party and took as many as five wickets to help Australia win the game. While Kohli went on to get two tons in the game, the second man to do it on captaincy debut, Lyon finished with his career best figures.

It went down to the final session with India needing 159 in the remaining 37 overs. both Vijay and Virat Kohli were in the 80s with the game setup. When they started the run-chase earlier in the day, they would not have  thought about the possibility of winning the game. Vijay and Kohli took India to 105 for two at lunch and then added a further 100 in the afternoon session. They were assured and authoritative in the middle. Lyon did pose questions but they dealt with with a calm approach.

Then, the game changed in the evening. While Kohli was assured and got his second ton in the game, wickets fell at the other end even as India inched closer. Vijay was shaky on 99 and was finally leg-before. The umpiring was a dubious as earlier Dhawan was given out got behind when he had not got an edge. Vijay got a life when he was given not out when he was plumb. The panic ensued! Soon Ajinkya Rahane, Rohit Sharma and Wriddhiman Saha followed. Lyon got his 10-for in the game.

Kohli battled on and gave hope to India, but then he holed out to mid-wicket, playing that trademark pull, he was caught at mid-wicket. He was inconsolable when he walked off. That was the end of the Indian challenge. Nevertheless, it made for a great Test match and despite the defeat, India can take heart from a few performances.

There was everything to this Test match. From the emotion surrounding Phil Hughes’ passing to some fiery verbal duels, things normalised as the days progressed. Australia dominated for a major part of the Test match, but India’s batting also rose to the occasion and ensured that they weren’t steamrolled following a poor bowling performance.

Australia amassed 517 for seven and declared overnight on Day Three after a rain-affected Day Two. David Warner, Michael Clarke and Steven Smith got emotional tons. The Indian bowlers had made the mistake of bowling too wide to Warner to start with and he capitalized on that. His celebrations were emotional and muted. Clarke too had tears when he got his ton and Smith walked to the ‘408’ mark. Clarke had in fact come on after retiring hurt on 60 following some back trouble.

India’s first innings was led by a solid performance by the top order. Murali Vijay and Cheteshwar Pujara got solid fifties. However, it was Kohli who stole the show with his seventh Test ton, his second in Adelaide. He was keeping India on course but his wicket late on Day Three allowed Australia back in the game.  On the fourth morning, Lyon completed a five-for and helped Australia take a crucial 73-run lead.

Warner led the way again with his second ton in the Test match. He was a part of a bit of a duel as he mocked Varun Aaron after he was dismissed off a no-ball. That led to a small tiff with the Indian fielders. Later, Smith too was involved in a bit of an argument with Kohli. Australia declared after putting up 290 for five, leaving India with 364 to win.

Man of the Match: Nathan Lyon 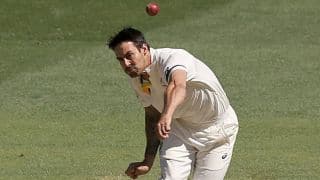 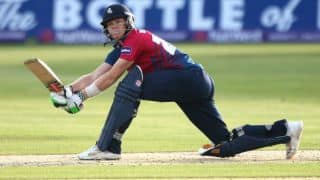