Virat Kohli, draws the highest salary of whopping Rs. 15 crore in the cash-rich Indian Premier League (IPL), which was revealed on Friday as reported on CricBuzz. The actual salary details of the players retained by the franchises was released, Rajiv Shukla, IPL chairman, after the IPL draft held on December 15. The 27-year-old Indian skipper, who also leads Royal Challengers Bangalore (RCB), has a staggering Rs. 15-crore agreement with the franchise, Rs. 2.5 crore more than what the franchise had to shell out from their virtual salary purse when they bought him at the inaugural auctions in 2007. ALSO READ: Sachin Tendulkar, Virat Kohli, Dale Steyn wish fans Happy New Year 2016: Twitter Reactions

The package makes Kohli the most prized player in the league, ahead of MS Dhoni and Shikhar Dhawan who draw Rs. 12.5 crore each from their respective franchises. Dhoni was the first pick for the newly founded Team Pune in the recently held IPL player draft in Mumbai, while Rajkot paid a similar Rs. 12.5 crore for their first choice of player Suresh Raina. The Board of Control for Cricket in India (BCCI), however, immediately clarified that the ten players bought by the two new teams Pune and Rajkot will continue to draw the same salaries as they did from their former franchises instead of the value the franchises had to shell out. Rajkot will pay Raina Rs. 9.5 crore only as per his agreement with the now defunct Chennai Super Kings (CSK) despite being docked of Rs. 12.5 crore from their salary purse to buy him. ALSO READ: Virat Kohli needs to be consistent as batsman, says Gundappa Vishwanath

Similarly, Ravindra Jadeja will draw his usual Rs. 5.5 crore from Team Rajkot, despite having a Rs. 9.5 crore tag attached against his name and Ajinkya Rahane will continue to get Rs. 8 crore 1.5 less than his auction value of 9.5 crore. Rohit Sharma, captain of defending champions Mumbai Indians, and Gautam Gambhir, who leads Kolkata Knight Riders (KKR), are the only other players who make more than Rs. 10 crore in a season. West Indies’ Kieron Polard, who has a Rs. 9.7 crore deal with the Mumbai Indians, is the highest paid foreign player in the annual competition. 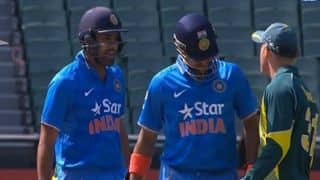