Virat Kohli and a few other players have backed Arun Jaitley in the entire DDCA scam.

New Delhi: Aam Aadmi Party (AAP) on Thursday used an interview of India Test captain Virat Kohli to claim a rotten state of affairs in the Delhi & District Cricket Association (DDCA) at the time when it was headed by Finance Minister Arun Jaitley. Claiming that many players in the national team were in party’s touch with regard to the alleged irregularities in the DDCA, the party also dared the cricket body to file a defamation suit against it, which it had threatened to do on Wednesday. “In the press conference yesterday DDCA’s acting president Chetan Chauhan said that the DDCA has produced players like Virat Kohli who captained Team India. They also claim that Virat Kohli has come out in praise of Mr Arun Jaitley. READ: Arun Jaitley comes under fresh attack from AAP, Kirti Azad

“But in an interview on December 18 in a national daily, the same player said that he was asked for a favour to get into him into the Under-14 Team. This was dismissed by his father. And Mr Jaitley was the President of the DDCA. This reflects that there were irregularities in the selection of the team,” AAP leader Ashutosh said.

Incidentally, many players, including Kohli, had come out in support of Jaitley after the charges were levelled against him over alleged irregularities in the DDCA. The party had yesterday accused Jaitley of putting pressure on the then Delhi Police Commissioner to “close” investigation involving a cricket club of a bank in 2011, while suspended BJP MP Kirti Azad claimed the SFIO probe report had recommended his “prosecution”. READ: DDCA to file defamation case against Arvind Kejriwal, Kirti Azad

“By trying to shield those involved in the DDCA irregularities as the Leader of Opposition, Jaitley has committed a constitutional crime, an offence against the country,” Ashutosh said.

“Mr Jaitley, despite being in possession of this report and knowing fully well about the illegality, irregularity and fraud indulged in by the DDCA office bearers under you, why did you lie to the Delhi Police in your letters dated 27 October 2011 and 5 May 2012, saying that the complaint was unsubstantiated and disclosed no offence, and the DDCA had done no wrong? READ: Kirti Azad demands CBI probe into DDCA corruption

Was this report shared with the DDCA members and was it placed before any AGM? Mr Jaitley, in both your letters to the Delhi Police you have tried to pressurize it for closing the case and stop questioning DDCA official to bring out the truth. Were you not trying to suppress the scam?” the party asked. READ: DDCA must be suspended by BCCI, according to 3-member inquiry panel 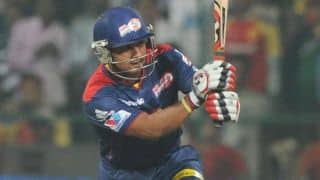