India's new batting sensation Virat Kohli, who has hit three hundreds in his four innings, is the ideal batsman to fill in the number three slot left by Rahul Dravid, former skipper Sourav Ganguly has said. 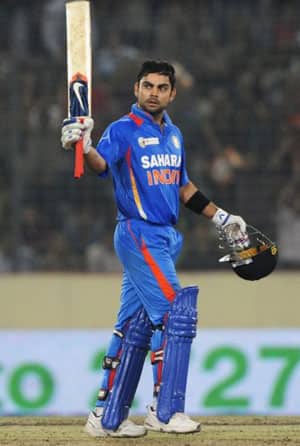 India’s new batting sensation Virat Kohli, who has hit three hundreds in his four innings, is the ideal batsman to fill in the number three slot left by Rahul Dravid, former skipper Sourav Ganguly has said.

Talking on the sidelines of the launch of a documentary on his cricketing career, The Warrior Prince, Ganguly said Kohli is the next big thing to have happened to Indian cricket.

Talking about Kohli’s blistering 148-ball 183 in their record win over Pakistan, Ganguly said, “He is the next big thing in Indian cricket. I’ve never seen a better one-day innings in my 22 years career. I hope he fills up the place of the champion Rahul Dravid at No 3,” Ganguly said.

“I had always said it was a matter of time. It’s a colossal achievement. I congratulate Sachin. I only sent a text message.”

During the DVD launch of the documentary, directed by Mitali Ghosal, Ganguly spoke to cricket commentator Harsha Bhogle on key phases of his career, beginning with the 1991 tour of Australia.

“I was 17 years old. I didn’t play for the entire tour. I went with high hopes. I was little awe struck after meeting greats like Kapil Dev. Initially I thought that I was taken as a left-handed batsman who can hit a few shots.

“But I ended up bowling at the nets. Then I was dropped ahead of the World Cup. I was happy to be back playing for Ranji for four years,” he recollected as Bhogle described him as a shy person when he had first seen him during Bengal’s 1989-90 Ranji Trophy triumph.

The talk then shifted to his debut Test hundred at Lord’s in the 1996 tour.

“It was an emotion that I can play.”

Asked about his ODI career-best 183 against Sri Lanka in the World Cup, Ganguly said the 97 he scored in his debut World Cup match had set the tone.

“It was chilly winter morning in South Africa and facing four-pronged South Africa pace attack was not easy. It was definitely special.”

On the 183-run knock in Taunton, during which he had despatched the ball out of the park many times, Ganguly joked: “It was a small ground. The bats were very good those days.”

On his ascent to captaincy something that changed the attitude of Indian cricket especially while touring overseas, Ganguly said a lot of factors had played a role.

“The quality of players changed. There were likes of VVS Laxman, Sehwag… It was a mixture of attitude, wanting to change Indian cricket coupled with keen to improve fitness.”

Recollecting his first day as coach, Ganguly said, “We would take a lap of a stadium once. But on his first day he said, ‘I am your coach. You have to run 10 laps of the stadium. You may abuse me.'”

“It’s the attitude to train, I think that changed the Indian cricket. A crop of players came in. I loved working with him. It was a great relationship. We thought alike.”

He said the 2003-04 when they reached World Cup final and beat Pakistan in Pakistan was the most memorable phase of his career.

There were also talks about his stepping down from captaincy during their tour to Zimbabwe and his infamous spat with then coach Greg Chappell.

“No differences of opinion last long. It was most frustrating period…”

On his retirement, he said: “I still had two years of cricket. But I was not enjoying. I was given Asian cricketer, Batsman of the year. I just felt that something was not right.

I didn’t want to play cricket like that.” (PTI)