Stand-in captain Virat Kohli termed Indian team's comeback after back-to-back defeat as a "commendable" one as it showed the character of the team which enabled them to reach the final of the tournament in such convincing fashion. 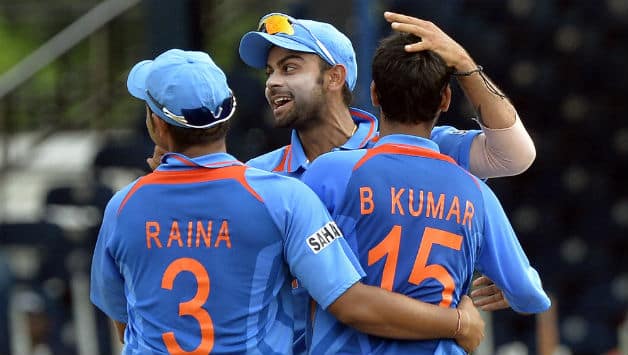 Stand-in captain Virat Kohli termed Indian team’s comeback after back-to-back defeat as a “commendable” one as it showed the character of the team which enabled them to reach the final of the tournament in such convincing fashion.

“To bounce back like this and finish top of the table is a commendable effort. I am very proud of the team,” a beaming Kohli said at the post-match presentation ceremony.

Kohli is happy that the team showed a lot of character in making such a strong comeback in the tournament.

“We have shown a lot of character. When three good teams are playing in the tournament, anything can happen. We were never bothered about the rain delays. Our performance showed what happens when one executes their plans properly.”

The young captain said that when he was involved in a 49-run partnership with Rohit Sharma, he didn’t want to take any undue risks.

“When I and Rohit were playing, we just wanted to play ourselves in. It paid in the end, because we had wickets in hand, and it worked in the D/L calculations. Then the bowlers responded beautifully. Full credit to them.”

Man of the match Bhuvneshwar Kumar termed the pitch at the Port of Spain as the “most helpful so far” that he has bowled on.

“It’s important to hunt in pair and pitch the ball in right areas. It worked well for me and I am proud that I have performed well for my country,” the Uttar Pradesh seamer said.

Rohit on his part said that he is happy to take up the challenge but it’s a long way to go.

“I took it up as a challenge. I know that I have a long way to go. I am really not bothered about whether I am getting a big score as long as I am contributing and working on my mistakes,” Rohit said.

Rival captain Angelo Mathews conceded that it was a tough wicket to bat on.

“It was a tough wicket to bat on,” he said. “We bowled well, but when we batted the pitch had been under covers and had sweated more. We had nothing to lose and went for it.”

Mathews said that it was very challenging to play three days in a row.

“It’s mentally and physically draining to play three days in a row. We have played some good cricket to get to the final, hopefully we can beat India.”