Indian head coach Ravi Shastri lauded the efforts of Virat Kohli and said that the Indian captain would have learned a lot in the tough South African tour.

Indian head coach Ravi Shastri lauded the efforts of Virat Kohli and said that the Indian captain would have learned a lot in the tough South African tour.

Speaking to India Today, Shastri said, As captain he would have learnt heck of a lot because this was a tough tour, make no mistake about it. I ve been going to South Africa since 1992, you tell me one South African team which is not a strong team? And when you look at their attack now, it s as good as any in the world specially in those conditions.

India were 0-2 heading to Johannesburg, having conceded the series at Centurion. India not only came back strongly on an extremely difficult track at the Wanderers but also picked up the momentum from there to win the ODIs 5-1 and the T20Is 2-1. Kohli, the driving force, scored 871 runs in the tour, becoming the only cricketer to score over 500 runs in a bilateral ODI series.

Virat Kohli leads from the front, said Shastri, He is a tough guy in the mind and that makes a huge difference because it spreads amongst his teammates as well. And we knew even after losing two Tests that we weren t far behind. People might say anything, they might write anything but we give two hoots.

Shastri reveals that Kohli was always clear that India were winning the Test. At one stage in the fourth innings, South Africa had limped to 120 for 1, almost half the score they were chasing, but that did not dent Kohli s confidence.

The captain not for one minute didn t believe India wouldn t win (the Johannesburg Test). That was the difference. Even at 120 for 1 he believed that India could win. Even when they came in at tea time he was very clear that we are winning this Test match . They (South Africa) were three down at that time. When you have that kind of self-belief, as I said it s like a disease which spreads among the other players, Shastri added.

The win helped India shed the tags of flat-track bullies and registered one of their finest Test wins. Nasser Hussain famously tweeted during the Test, If anyone ever calls this Indian batting line up flat track bullies again they need to be reminded of the skill and bravery they have shown in this innings. 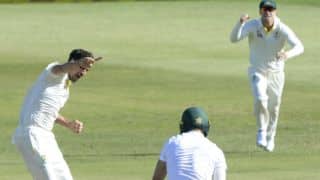