Shreyas Iyer has been named Domestic Cricketer of the Year.

Virat Kohli has been named the CEAT T20 Cricketer of the year 2016. CEAT Dream Team for T20s for 2016 comprises of six Indian players in the playing XI. They are Rohit Sharma, Kohli, MS Dhoni, Amit Mishra, Suresh Raina and Ravichandran Ashwin. The five foreign players are South African batsman AB de Villiers, Australian pacer Mitchell Starc, Andre Russell, David Warner and Faf du Plessis. Thus there are two South Africans, two Australians and a West Indian. Mustafizur Rahman is the 12th man. Dhoni has been named as the wicketkeeper and captain for this dream team. Kohli being named for this award is just another big achievement for him after bagging Player of the Tournament award in IPL 2016, and also being named as the third most marketable sportsperson in the world. READ: Virat Kohli ahead of Lionel Messi, Novak Djokovic as most marketable player 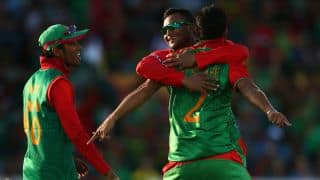