Virat Kohli on why he is "not a robot"

Virat Kohli on why he is "not a robot"

Virat Kohli has been playing almost non-stop cricket over the past year, but is yet to take a break from his busy international schedule.

Virat Kohli has been playing almost non-stop cricket over the past year, but is yet to take a break from his busy international schedule. It seems like he is on a race, but is yet to take a pit stop. Many experts believe that it is high time the Indian skipper takes a break as his team gears up for a tough South African tour in January 2018. However, Kohli himself does not feel so and is in no mood to take a break. Instead, he says he can continue as long as he wants and would only take a break when his body demands rest. FULL CRICKET SCORECARD: India vs Sri Lanka 2017-18, 1st Test at Eden Gardens

“Definitely I do need rest, why don’t I need rest? When I think of the time my body should be rested, I’ll ask for it. I am not a robot. You can slice my skin and check I bleed. This is one thing which I don’t think people explain properly. There is a lot of talk from the outside in terms of workload whether a player should be rested or should not be rested. All cricketers play 40 games in a year. Three guys who should get rest, their workloads are to be managed. 11 players play the game but not everyone would have batted 45 overs in an ODI game or not everyone would have bowled 30 overs in a Test match,” said Kohli during the pre-match press conference.

“But the ones who are doing it regularly need to be assessed because the body takes that much time to recover. People only look at ‘oh everyone has played 40 games’. They don’t look at time spent on the crease. The number of runs that have been run between the wicket, the number of overs bowled in difficult conditions, what were the conditions, what were the temperatures like, have the bodies recovered or not — I don’t think people go into that analysis. So from the outside it looks like ‘why are people asking for rest, everyone has played same number of games’.” Virat Kohli vs Dinesh Chandimal and other key battles

“Not everyone has the same kind of workload in every game. Only those who have major workload, for example Pujara during a Test season he will have maximum workload because he spends so much time at the crease. His game is built that way. So you can’t compare that to a counter-attacking batsman, because the workload would have been lesser.

“So I think all these things have to be taken into consideration. Purely because of the fact that we have built such a strong core team now of 20-25 players, you don’t want important players breaking down at important times for the team. That is where balance needs to be maintained going forward. If you have too much cricket going on, with guys who play all three formats, it’s humanly impossible to maintain the same level of performance, what you do earlier in the season. Those details are very important while managing workload.” 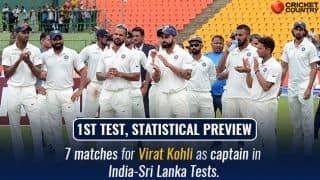