India’s Test captain Virat Kohli has dropped out of ICC’s top-10 list for batsmen in the five-day format, but R Ashwin’s remarkable outing in the ongoing series against Sri Lanka helped him earn a place to eighth in bowling while holding the second spot in the all-rounders’ rankings. Meanwhile, Sri Lankan batting legend Kumar Sangakkara finished his glorious career at seventh spot while another illustrious retiree, Australian captain Michael Clarke has finished his 115-Test career in 25th spot. Sangakkara, who scored 32 and 18 in Sri Lanka’s 278 runs defeat at the P Sara Oval, first reached No. 1 in the Test batting rankings in December 2007 against England after innings of 92 and 152 in Kandy. READ:

Sangakkara spent a total of 97 Tests and 812 days as the No. 1 Test batsman in the world and was last number-one in December 2014, before losing the top spot to AB de Villiers. His highest-ever points tally was 938, achieved on 1 December 2007, and that total is the highest-ever achieved by a Sri Lanka batsman to date and the joint sixth-highest of all-time. While Clarke surged to the top of the rankings in August 2009 and did so for the last time in February 2013. During this period, he topped the batting rankings on several occasions (totalling 11 Tests and 70 days).

Clarke is one of the 30 internationals, including eight Australia batsmen, to reach 900 points, which was incidentally his highest points tally that was achieved after the 2012 Boxing Day Test against Sri Lanka. The other big movers in the latest batting rankings are India’s Ajinkya Rahane (up two places to a career-high 20th), Sri Lanka’s Dimuth Karunaratne (up two to 34th) and England’s Moeen Ali (up two to a career-high 48th), while Lokesh Rahul (up 30 places to 87th) and wicketkeeper Wriddhiman Saha (up 15 places to 100th) also climbed up the ladder.

In the ICC Player Rankings for Test Bowlers, Australia’s Mitchell Johnson has gained two spots to sixth after recording match figures of four for 86 in London, while Ashwin’s match tally of seven for 118 in Colombo has helped the off-spinner overtake Rangana Herath into eighth place on 769 points. The biggest mover in the bowling rankings, though, was India leg-spinner Amit Mishra, whose match haul of seven for 72 has helped him move up 42 places to a career-high 39th.

Ashwin has also gained ground on Bangladesh’s Shakib Al Hasan in the rankings for all-rounders and has reduced the deficit on the leader to 43 points. In batting, Steven Smith has reclaimed the top spot ahead of de Villiers and Joe Root of England. In the deciding third and final Test between Sri Lanka and India, which starts at Colombo on Friday, if India win the series 2-1, it will overtake New Zealand and move into fifth place. But a Sri Lanka win would see them overtake India into sixth place. In the event of a 1-1 tie, India would remain in sixth spot, four points clear of the Lankans. 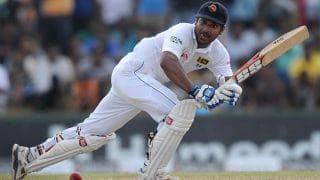 Kumar Sangakkara all geared up for his second innings