Virat Kohli has scored his sixth century in Test cricket.

Virat Kohli has scored a century against New Zealand in the second Test in Wellington on February 18, 2014. This is Kohli’s sixth century in Test cricket. India are at 163 for three after 49 overs. They are chasing a 435-run target. Kohli is batting on 103 and Rohit Sharma is on 30.

This is Kohli’s third century away from India. His first century came in Australia and the second in South Africa. Kohli had some luck along the way in this innings. He edged a Trent Boult delivery to wicketkeeper BJ Watling, but the umpire gave it not out. 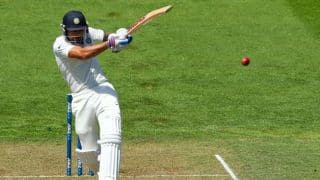