Virat Kohli stood up in support for Anushkha Sharma when he tweeted, “Shame on people for trolling @AnushkaSharma non-stop. Have some compassion. She has always only given me positivity.” He said that after social media once again targeted the Bollywood actress for Kohli’s good form. Kohli’s unbeaten knock of 82 off 51 balls led India to a six-wicket victory over Australia and with that win they knocked out Australia of the World T20 2016. India will face West Indies in the second semi-final of World T20 2016 in Mumbai on March 31. This is for the very first time the Indian cricketer has spoken in defence of Anushka. READ: Virat Kohli was invincible and Australia lost to him

Shame on people for trolling @AnushkaSharma non-stop. Have some compassion. She has always only given me positivity pic.twitter.com/OBIMA2EZKu

The Indian cricket fans have made it a habit to drag Anushka in the discussion on social media every time Kohli performed well. Anushka Sharma was made to trend on twitter after Kohli led India to a superb victory against Pakistan earlier in the month.

The couple have been a hot topic of discussion ever since they opened about their relationship. However, earlier in the month there have been rumours about the pair splitting up. There was no confirmation from the duo though. However, the lowest point of their relationship which was always in the eye of the public came in the semi-final match of the ICC Cricket World Cup 2015, when Kohli’s rare blip in the all-important match against Australia resulted in India’s exit. India had gone undefeated till the semi-final, and a mis-hit on a short delivery from Mitchell Johnson ended in his dismissal. The official broadcaster ensured to show Anushka — who was shattered like every Indian cricket fan — in sheer disbelief. 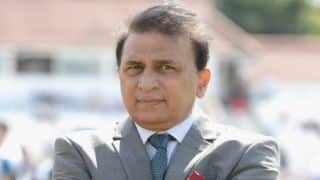