Ashwin bagged the Indian cricketer award while Kirmani was felicitated with the lifetime achievement.

In the 17th edition of the CEAT International awards was held with a lot of pomp and fanfare that witnessed the who’s who of the cricketing world hobnobbing and rubbing shoulders with each other. The ceremony did not spring any great surprises and Indians were on the forefront of it all, sweeping away with a major chunk of the silverware.

The gala kickstarted with Shakib al Hasan being awarded the best T20 Player in the world award and was followed by Shikhar Dhawan, who was his dapper self and dedicated his best One-Day International (ODI) player award to his son. Rising Indian star Vijay Zol was awarded with the young Indian Cricketer of the year award. The Southpaw from Maharashtra, who captained the India U-19 team in the World Cup recently, said, “I feel the margin of error is really low in international cricket,” Zol said after winning the award.

Robin Uthappa‘s fairytale run with the bat for franchise and state was rewarded with the CEAT domestic player of the year award. It was yet another feather to the Karnataka batsman’s hat this year and in his acceptance speech he praised his coaches on working on his technique and stated that the IPL win made it all the more sweeter.

Glenn Maxwell‘s big-hitting pyrotechnics  earned him the Popular Cricketer of the Year award while Maxwell’s new found nemesis on the cricket field, Ravichandran Ashwin won the Indian player of the year award. The Off-Spinner even thanked Maxwell on stage for making him think and innovate as a bowler.

Legendary Indian wicket-keeper Syed Kirmani was crowned with the Lifetime Achievement award and the the mercurial Kirmani recounted his struggles during his playing days. The 1983 World Cup winner also recounted his time with Sunil Gavaskar — on and off the field. The two major absentees at the event was Virat Kohli, who was adjudicated the CEAT cricketer of the year and Australia’s tearaway pacer Mitchell Johnson. Johnson won the Test player of the year award for his marauding display with the ball in helping his country trounce England 5-0 in the Ashes.

Most Popular Cricketer of the Year: Glenn Maxwell 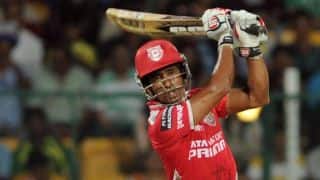