New Delhi: India Test captain Virat Kohli, premier batsman Shikhar Dhawan and speedster Ishant Sharma have been named in the Delhi one-day side which will be led by Gautam Gambhir for the North Zone leg of the Vijay Hazare Trophy between December 10 and 18. The trio has been selected keeping in mind that India’s tour of Pakistan looks unlikely at the moment and there is a one month window before the team travels to Australia in January for the limited-overs series. In case the Pakistan series happens, three stand byes have also been announced. However, the selection committee chaired by Vinay Lamba could not give a convincing answer as to why India’s current Test captain and a prolific one-day player like Kohli was not named captain if he is available. READ: Sourav Ganguly says Virat Kohli reminds him of his days as India captain
“We had announced Gautam as the captain for the whole season as the international players were not supposed to be available. I don’t think one should make a big issue if Virat plays under Gautam,” Lamba told PTI after the meeting was held at the Roshanara ground today. However, he clarified that the selectors are yet to speak to the India players confirming their availability.
A similar case of miscommunication had happened when Ishant Sharma was not initially named in the four-day squad despite being available as he could not be contacted at the time of the meeting.
“Look we have not had any direct contact with the players but we did not want to take any chances in case they are available. But as a safety measure, we have kept three stand byes also,” Lamba said.
Interestingly, when Kohli played for Delhi in a Challengers Trophy tournament back in 2013, he led the side that had both Virender Sehwag and Gautam Gambhir. For the record, veteran pacer Ashish Nehra, who has quit the longer format, has been selected in the one day side. READ: Gautam Gambhir meets Arvind Kejriwal to discuss financial irregularities in DDCA 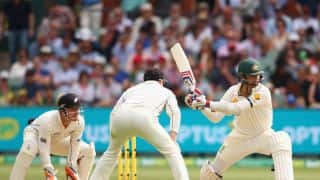