Chasing such a big target, that too in the finals was never going to be easy and India had pinned all its hopes on Virat Kohli.

London: India skipper Virat Kohli on Sunday expressed disappointment after losing against Pakistan in the Champions Trophy final but said that his team has just lost a game of cricket against a side which outplayed them. Pakistan came out with a splendid all-round performance as they defeated arch-rival India by 180 runs at The Oval to lift their maiden Champions Trophy title. Chasing a challenging total of 339 runs, India bowed down before the Pakistani bowlers and got all out for mere 158 runs in 33.3 overs. FULL CRICKET SCORECARD: IND vs PAK, Champions Trophy 2017 Final

“Indeed (disappointing). Congratulations to Pakistan and their fans. The way they turned things around speaks volumes of the talent they have in their side. They can upset anyone on their day,” said Kohli in the post-match presentation ceremony. The India skipper said that it was indeed disappointing to lose but he was proud of the team as they played some really good cricket to enter the finals of the Champions Trophy.

“Credit to Pakistan; they outplayed us. We never took anyone lightly. They were more intense and more passionate,” he said. “We haven’t won the final, have lost a game of cricket, and that’s all. We need to move on and learn from our mistakes.We just weren’t good enough on the day. We will take that on the chin and move on,” he added.

Chasing such a big target, that too in the finals was never going to be easy and India had pinned all its hopes on Virat Kohli, one of the best chasers in the world as he had done so many times for the Men in Blue in the past. 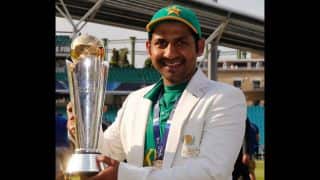