"We lived this dream to play this first Test against India in India."

Afghanistan Cricket Board CEO Shafiq Stanikzai today said it would be a dream come true to begin their Test journey against India but they would “miss” playing against Virat Kohli.

India skipper Kohli will not be part of Afghanistan‘s debut Test, which is scheduled to be played at Bengaluru’s Chinnaswamy Stadium from 14 June, as the prolific batsman will be heading to England to play county cricket for Surrey.

“We lived this dream to play this first Test against India in India. That moment has come true. Virat is a world cricket icon, something our players will miss the exposure playing against.

“Nevertheless, it will be a good opportunity and we will cherish every single moment of that match,” Stanikzai told PTI on the sidelines of the five-day ICC quarterly meeting here.

He said Afghanistan will not play against India in Test matches in the new FTP from 2019-2023 even as they will play all top nations, including Australia and England.

The trouble-torn Afghanistan currently play their home matches at the Sharjah Cricket Stadium, and also have two ‘home’ bases in India — Greater Noida and Dehradun.

The CEO said they have the three venues to choose from for the upcoming Tests in the 2019-2023 FTP.

“For the time being we have three venues to choose from. We have two venues in India thanks to the BCCI. We also have Sharjah Cricket Ground, it depends on the scheduling where we play.”

Their earned their Test status alongside Ireland in June last year.

“India are a tough team to get hold of because they are very busy. Since we are not in Test Championship, the inaugural Test match is good enough for us. We are playing 14-18 Tests in new FTP cycle,” Stanikzai said.

Afghanistan’s FTP will end in March 2022, he said.

“Against India we will be playing only one Test and that is in Bengaluru. That was in earlier FTP. The new FTP is 2019 to March 2022,” he added.

He added Afghanistan will play bilateral home and away series against England, Australia, West Indies, Zimbabwe, Ireland and Bangladesh as per the next FTP.

“It does not come under the Test Championship, these will be all bilateral series — home and away.”

They are also considering day-night matches.

“As of now it’s not yet decided. But there will be, we are deliberating.”

The ICC Chief Executives’ committee drew up the fixtures for the event, but they will have to be passed by the ICC Board before it’s made public.

Afghanistan and Ireland were made full members of the International Cricket Council (ICC) in June, becoming the sport’s 11th and 12h Test-playing nations. 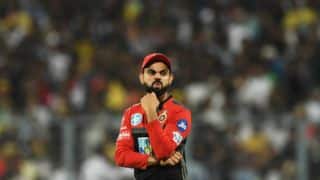