Virat Kohli, who missed the final Test at Dharamsala due to a shoulder injury, was mocked by a few Australian players in the Ranchi Test after he hurt his shoulder while saving a boundary.

Kohli however did bat and took field for Australia s third innings at Ranchi, but did not clear the late fitness test that was conducted ahead the fourth Test. Kohli was earlier in the series unhappy with the fact that Australia skipper Steven Smith looked at the dressing room for assistance with DRS after he was given out. Smith then said that was a brain fade moment. Kohli went on to add that India must now do well overseas after dominating the home season. Our main challenge begins now, if we conquer the overseas season then you will see the broadest smile on my face, said Kohli. READ:India trounce Australia by 8 wickets in Dharamsala Test to reclaim Border-Gavaskar Trophy 2016-17

India have dominated this entire home season, which began back in September 2016, with the arrival of New Zealand. They beat the Kiwis 3-0, followed it up with comfortable series wins over England (4-0) and Bangladesh (1-0). They have now rounded off the Border-Gavaskar Trophy series against Australia with a 8-wicket win at Dharamsala. 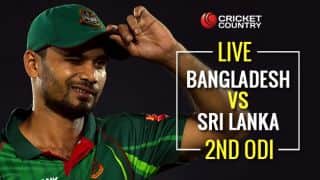