India's Virat Kohli was on Saturday named the ODI Cricketer of the Year at the ICC annual awards function at Colombo. 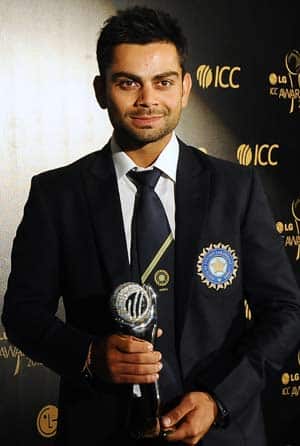 India’s Virat Kohli was on Saturday named the ODI Cricketer of the Year at the ICC annual awards function at Colombo.

Kohli won the award for his consistent performance over the last 12 months during which he amassed runs all over the world and against almost all the countries India played.

During the last one year, Kohli played 31 ODIs and scored 1733 runs at an outstanding average of 66.65, including eight hundreds and six half-centuries.

His highest score was 183, against Pakistan in the Asia Cup.

“I think I have tried to keep things as simple as possible and it’s worked for me on the field,” Kohli said.

“This year has been a learning curve along the way from the seniors in the team. It’s been an all-round effort and I’m very happy to have won this award.

“It’s always nice to be recognised by the ICC and it’s a great feeling and it’s the first time I’ve won one of these awards and it feels great,” he added.