India Test skipper Virat Kohli on Thursday extended Diwali greetings to the Indian army, emphathising with the soldiers who spend the auspicious occasion on the border.

India Test skipper Virat Kohli on Thursday extended Diwali greetings to the Indian army, emphathising with the soldiers who spend the auspicious occasion on the border protecting the country. “I, Virat Kohli, want to wish on this Diwali our jawans all the best,” he wrote on Twitter. “I know what it means staying away from the family. The way you protect our country is worth a lot of praise. My brothers, keep faith that I and the entire country will always be with you,” he added. He also wrote on the social networking site, “Whenever you see a jawan, salute them. We get to celebrate festivals & live in peace because of them. Jai Hind #Sandesh2Soldiers.” FULL CRICKET SCORECARD: India vs New Zealand, 5th ODI at Vishakhapatnam

Kohli’s message comes on the back of the Uri attack which claimed the lives of 19 Indian soldiers in Kashmir in September. Pakistan-based terror outfit Lashkar-e-Taiba has claimed responsibility for the ghastly attack which has kept relations between the squabbling nations at boiling point. On the eve of India’s holy festival Diwali, Kohli along with Rohit Sharma and Ajinkya Rahane also send their wishes to Indian soldiers through a video which was posted by BCCI’s official Twitter account.

With every passing day, Team India s run-machine and the Test skipper Kohli seems to be smashing and rewriting records in One-Day International (ODI) cricket. Recently, during the third game of the five-match ODI series against New Zealand, Kohli emulated Sachin Tendulkar s record of 14 ODI centuries while batting second. Besides, he also brought up his 26th ODI hundred and became the fastest to do so by reaching the landmark in just 166 innings, this eclipsing another record of Tendulkar, who held it till then (247 innings). In the process, Kohli also surpassed Javed Miandad s tally of ODI runs (7381) and is now 31st on the list of most runs in ODI history. 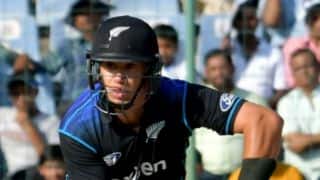 Ross Taylor: New Zealand have not won a series in India, looking forward to it