Ashwin was described as "priceless" by Kohli after the recent Test in Bangladesh.

Harare: Indian off-spinner Ravichandran Ashwin on Thursday heaped praise and termed Test skipper Virat Kohli as an aggressive leader who wants to keep improving his game and not just rest on his laurels. “He is very aggressive, upfront and on the face. I don’t quite do that but I still want to take the centre stage. If he is the batsman doing it for India, I want to be the bowler that does it for India. The one driving factor that is common to us is that we want to keep improving and we don’t want to sit on laurels. I really admire that aspect of his which I don’t think is very common,” Ashwin was quoted as saying by ESPNcricinfo.

Ashwin was described as “priceless” by Kohli after the recent Test in Bangladesh where he claimed five for 87 in the first innings of a rain-affected game. Ashwin was equally appreciative of Kohli, saying there were parallels in their approach to the game. “Whichever team I’ve turned up for, I’ve always wanted to contribute and be the prime performer. To a degree, Virat is very similar and I love that character of his because we both go about our business in a very different manner,” Ashwin said.

Asked if he would like to captain the national side in the future he said, “If you would have asked me 2-3 years ago, I would have said yes like any vibrant youngster. There are a lot of occupational hazards. I wouldn’t say that’s a priority because it is not in my hands,” said the tweaker.

“Somebody has to identify something in me to hand over such a big responsibility. I led Tamil Nadu when I was 20. That really put me on the map when it came to playing for India.” The 28-year-old’s next assignment will be India’s forthcoming series in Sri Lanka in August. He doesn’t expect the pitches to be as spin-friendly as many do but on the back of encouraging recent form, he isn’t too concerned.

“The wickets are much truer and have something for the fast bowlers. It is not easy but we have to go there and acclimatise and play some good cricket as Sri Lanka is going to be a very tricky destination. The way I bowled in Bangladesh is where I would like to be all through my career, however long I continue to play. If I can replicate what I did in Bangladesh, it should not matter a great deal,” he said. 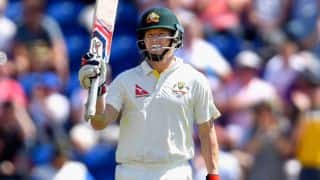