This was Virat Kohli's 12th Test ton and 5th as India's captain.

Virat Kohli played a fluent innings as his unbeaten century has taken India to 302 for 4 at stumps on Day 1 of the first Test at Antigua. During his innings he went past 3,000 career runs and also became the ninth Indian player to score over 1,000 runs as India s captain. This was Kohli s 12th century in the longest format. West Indies bowlers toiled hard throughout the day. Devendra Bishoo was their pick of the bowlers. But it was Shannon Gabriel, who started things of well for the hosts. He got rid of Murali Vijay early with s sharp bouncer. Bishoo then removed Cheteshwar Pujara immediately after lunch. FULL CRICKET SCORECARD: India vs West Indies 2016, 1st Test at Antigua

But India were able to build a good partnership. Shikhar Dhawan and Kohli got together after the dismissal of Pujara and put on 105 for the third wicket, which put India in command. Dhawan however was dismissed last ball before the tea break for 84, trapped in front by Bishoo once again. It was Ajinkya Rahane, who walked in at No. 5 for India. He scored two tons in his previous Test against South Africa. He could not do much of damage as he pulled the ball straight to mid-wicket for 20, when Kohli was on 99. IND vs WI Live Streaming: Watch live telecast on Ozee.com

To everyone s surprise, Ravichandran Ashwin walked in at No. 6, ahead of wicketkeeper-batsman Wriddhiman Saha. The exact reason for this decision is not known. Ashwin and Kohli slowly started to pile on the runs much to the frustration of the West Indies bowlers. But the duo battled on till the end, brought up their 50-run stand and ensured that India do not lose any further wickets. They will resume Day 2 of the Test in a commanding position.

Earlier, India won the toss and elected to bat first. India are going in with five bowlers in this game. Amit Mishra and Ravichandran Ashwin are the two spinners for this game. Ishant Sharma, Umesh Yadav and Mohammed Shami are the fast bowlers. As far as West Indies are concerned, there are not many surprises. However, Roston Chase makes his Test debut after an excellent season with Barbados. LIVE: India vs West Indies, 1st Test at Antigua, Day 1

West Indies have not beaten India in a Test since 2002. India on the other hand are in good form, having won their last two Test series under Kohli s leadership. 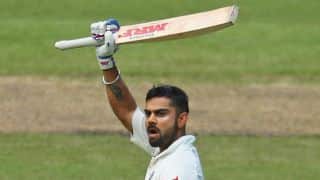