Rising Pune Supergiants have set target of 192 against Royal Challengers Bangalore in Match 35 of IPL 2016 at Bengaluru.

Royal Challengers Bangalore (RCB) have skipper Virat Kohli as a blessing and this time he does it once again for his side with a thrilling 6th half-century in this edition of IPL in the on going match against Rising Pune Supergiants (RPS) at Bengaluru. On the hindsight, Adam Zampa, RPS new find picked two crucial wickets of KL Rahul and AB de Villiers within the 12th over in his first edition of IPL. RCB started off for flying start with Rahul and Kohli securing 50-runs stand in the initial overs while chasing target of 192 against RPS. Earlier, it was Rahane and Tiwary putting up a stand of 105 propelling RPS to 191 for 6 at RCB’s home ground. LIVE CRICKET SCORECARD, Royal Challengers Bangalore vs Rising Pune Supergiants, IPL 2016, Match 35 at Bangalore

RPS did try various ways to restrict Kohli with run out chances twice and both opportunities missed once by George Bailey while second one by keeper and skipper MS Dhoni. RCB did show some excellent skills with their bowling with Shane Watson scalping 3 for 24 at the end of 4 overs and newbie Chris Jordan getting his first conceding 43 runs at the end of his spell. Apart from Rahane and Tiwary, Dhoni, Ravichandra Ashwin and Thisara Perera kept the momentum going in death overs to lead RPS to mammoth total. Earlier, RCB won the toss and elected to bowl. Given the kind of trend modern-day captains follow, it was a good decision to put RPS to bat first.

Gone are the days when the batsmen feel pressure while chasing down a mammoth total. However, it’s a must-win game for RPS as they have won only 3 matches out of 9. Thus, a defeat will end their dream of entering the Playoffs. 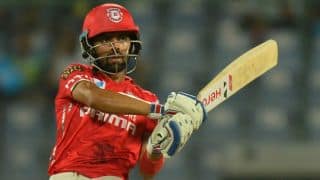