Virat Kohli and Sachin Tendulkar are two of the finest cricketers India have ever produced.

Virat Kohli and Sachin Tendulkar have drawn comparisons at different levels. While Tendulkar has been hailed as cricket s most complete batsman since Don Bradman, Kohli is regarded as the greatest all-round batsman of the current generation. Kohli is a self-admitted Tendulkar fan, and the duo have played together for half a decade. In fact, both were a part of India s World Cup triumph in 2011. On the occasion of Teacher’s Day, the duo came up with interesting respective posts on social media.

Tendulkar narrated an anecdote involving his guru Ramakant Achrekar. Going down memory lanes, Tendulkar threw light on the biggest lesson of his life, when he got a sound scolding at the Wankhede Stadium. Much before his debut, Tendulkar, a naughty child, had to be often brought in line by his elder brother Ajit and Achrekar: Back in my school days, I used to play only for the junior team and our senior team was playing the Harris Shield finals at the Wankhede Stadium. And our coach Ramakant Achrekar sir had organised a practice match for me. He had told me to go there after school and bat at No.4. He said he had spoken to the captain and you would not need to field. That used to be my training. That was important because you needed to figure out your game there and figure out how to score runs in the middle.

But I left all of that and sat at the Wankhede watching the Harris Shield final, cheering the senior team, clapping. After the match, I saw Achrekar sir and I thought it would be good to wish him. I greeted him and he asked me how many runs I got in the match and I told him I never went to play it because I wanted to cheer the senior team and clap for them.

Then he scolded me a lot in front of everybody and said I did not need to clap for others. He said I should take care of my own game and do something so that one day, the world can clap for you. That was the biggest lesson of my life. After that day, I never missed another match, Tendulkar narrated in a video.

Happy #TeachersDay! The lessons you taught me have always served me well. Sharing an incident with you all that changed my life! pic.twitter.com/J1izUvPG3C

Meanwhile, Kohli posed in front of a wall with all his idols names etched on it. A more bolder and younger way to show tribute.

To all the teachers around the world and especially to the ones in the Cricket World. #HappyTeachersDay pic.twitter.com/pvtrBw5uyK

Starting with Tendulkar and MS Dhoni to Sourav Ganguly to Inzamam-ul-Haq to Shane Warne to Viv Richards to Brian Lara to Ricky Ponting and a few others, Kohli wrote, To all the teachers around the world and especially to the ones in the Cricket World. 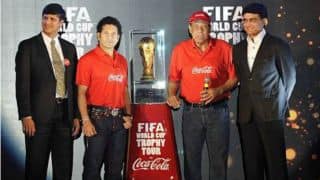