It’s been reported that the step was taken after the DDCA management refused to retain the services of Manoj Prabhakar as Delhi bowling coach as recommended by the cricket committee.

As per a report in the PTI, Gautam Gambhir was against Prabhakar’s continuation due to his alleged involvement in the 2000 match-fixing scandal.

“We had come together and given time and effort with the idea of contributing and helping in the improvement of Delhi cricket within the framework of our role as a cricket committee,” Sehwag was quoted as saying by the PTI.

”However, looking at the best interest of Delhi Cricket, we would like to inform you that all three of us would not be able to continue with the assignment of Cricket Committee of DDCA any further due to our busy schedule in day to day life,” he added.

The source further claimed that since DDCA is in the process of submitting a new constitution which would have anyway required them to appoint a fresh panel.

“After the new constitution is adopted, Sehwag would have been hit by Conflict of Interest clause as he is an expert in the DDCA president’s channel. Similarly, Sanghvi is associated with Mumbai Indians. So they knew they had to go,” the official said.

When quizzed why Gambhir was silent in 2007-08 when Delhi won the Ranji Trophy with Prabhakar as the bowling coach or the last season, the official said, “In both cases there was nobody who would have listened to Gambhir. If you look at 2016 season, Ajay Jadeja was appointed coach and as a captain he had to put his foot down. No alleged match-fixer in the dressing room of which he is a part.” 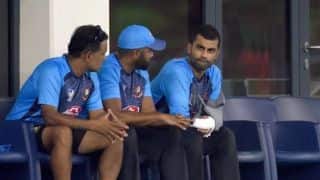