Virender Sehwag wishes former India batsman and current Chairman of Selector Sandeep Patil a happy birthday in his own style.

He was unstoppable on the field, and now he’s unstoppable off it. Virender Sehwag and his tweets have been making rounds on Social Media. Be it rhyming words, making puns or cracking jokes, whatever he tweets takes everyone aback; obviously in a funny way. First, he showered praises on Women Wrestler Sakshi Malik on winning the Bronze medal in Rio Olympics 2016. In addition, he retweeted tweets that hailed her performance. And now, he strikes again! This time, he wishes former India batsman and current Chairman of Selector Sandeep Patil a happy birthday in his own style. Also read – Sakshi Malik shines at Rio: Virender Sehwag throws spotlight on girl child while congratulating bronze-medal winner

“Sandip Patil was a Kaatil”
Of bowlers,ask Bob Willis whom he hit for 6 4’s in an over
Hpy Birthday Sandip Patil ji. pic.twitter.com/3BNKr6BVWT

No doubt that his tweets are full of entertainment, and his fans are fond of his new hobby.

Indeed, he did so and left no stone unturned to impress one and all. 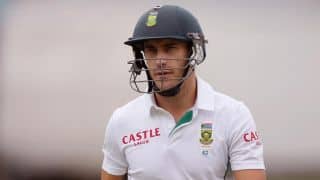 Fans react to Sharjeel Khan's whirlwind 152 against Ireland on Twitter